Skip to content
You are here
Home > ANALYZED > THINK CPU PERFORMANCE BENCHMARKING IS COMPLICATED? THINK AGAIN.
hgadmin - July 6, 2018
0
If you are one of those people that say “Huh?” when someone talks about performance benchmarking, fear not. It isn’t that complicated. In a nutshell benchmarking is a series of tests that are run on your machine to determine its performance. The performance is usually a relative score that you can use to compare with other machines. Windows 7 even comes with its own built in tool and assigns an index for every system it is installed in.

There are many free benchmarking applications available for download such as:

Unfortunately there is no universal benchmarking tool or score but just a widely used one. From what I gather, 3DMark and PC Mark are the most widely used tools to assess performance. If you are a hardcore gamer and graphics are your primary concern, 3DMark is probably the right choice for you. For overall system benchmarking, PC Mark is a safe bet. They can be downloaded athttp://www.futuremark.com/benchmarks/. I downloaded the free basic version of PC Mark 7 (specific to Windows 7) to run my tests. The paid versions give you the options to do additional tests (and customize them). The PC Mark 7 UI is very simple and intuitive to use as seen in the screenshots below. 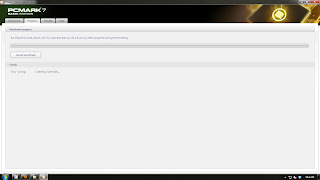 Using the information from the results page, you can visit the central 3Dmark database at http://3dmark.com/search and do a search based on the CPU and graphics card etc. to compare your result to similarly spec’d machines. The machine that was used for this test was not too powerful and hence the low score. These tests can be run any number of times and you can compare the results to the original benchmark score to see if new components have a positive or negative impact! That doesn’t look too complicated now does it?

The 87th Academy Awards is just under END_OF_DOCUMENT_TOKEN_TO_BE_REPLACED

If you recall, we did END_OF_DOCUMENT_TOKEN_TO_BE_REPLACED

“The future is awesome. We END_OF_DOCUMENT_TOKEN_TO_BE_REPLACED

So, the bloom has finally END_OF_DOCUMENT_TOKEN_TO_BE_REPLACED

We have always been a END_OF_DOCUMENT_TOKEN_TO_BE_REPLACED